Director of the Institute, Doctor of Sciences (History) 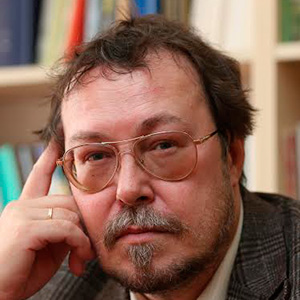 L. Zherebtsov was born on November 24, 1960 in Syktyvkar. In 1983 he graduated with honors from the Historical faculty of Syktyvkar State University, and went to work to the Institute of Language, Literature and History of the Komi Branch of the USSR Academy of Sciences. In 1983-1984 he served in the Soviet Army. Since 1984 he works at the Institute of Language, Literature and History, graduated from postgraduate course on speciality 07.00.02 – history of the USSR (by correspondence), occupied positions of a senior laboratory assistant, Junior researcher, researcher, senior researcher, Head of the Department of History and Ethnography, Scientific Secretary of the Institute (1996-2001), Deputy Director for scientific affairs (2001-2010). Since December 2010, he was Acting Director of the Institute, in April 2011 at the General meeting of the Ural Branch of the RAS he was elected Director of the Institute.

In May 1989 in Moscow (People’s Friendship University) he defended his Candidate’s dissertation on speciality 07.00.02 – history of the USSR “Migration of population of the Komi region in the end of XVI − beginning of XVIII century”, in November 1998 in Ekaterinburg (Institute of History and Archaeology, Ural Branch, Russian Academy of Sciences) – the Doctoral  dissertation on speciality 07.00.02 – national history “Demographic processes in the Komi region in the end of XV – beginning of XX century”. He has the academic title of “senior researcher” (1994).

He made a great contribution to the development of important problems of the historical demography of the Finno-Ugric peoples, the history of the Northern regions. Having studied the impact of natural and geographical conditions on demographic processes at different stages of history, he proved the relationship between the changes occurring in these processes and climate change, formulated the conceptual framework of the approach to the analysis of climate change as an important factor in the history of population, proposed in the framework of the theory of demographic cycles to consider climate change as a factor determining these cycles. He conducted a comparative study of the historical and demographic development of the Finno-Ugric peoples, revealed the significant role of the climatic factor in their demographic history. He showed that the migrations of immigrants from European Russia to the Urals and beyond the Urals were the result of climate change, that the development of Siberia and the Far East was initially international in composition of the pioneers, highlighted the significant role of the Komi Republic in this process. He revealed the regional features of demographic processes in the European North of Russia. Very important and promising is the complex interdisciplinary approach used by I. L. Zherebtsov to the study of historical and demographic problems, in which the traditional methods of analysis of historical sources are organically supplemented by methods of related Sciences – anthroponymy, dialectology, folklore, which allows to obtain additional very significant scientific results.

He is carrying out extensive scientific-organizational work. He made a significant contribution to the coordination of humanitarian research in the Republic of Komi, to the creation of fundamental research on the history and culture of the region. He is heading 16 of the planned research themes and scientific projects, performed by the Programs of fundamental researches of the Presidium of the Russian Academy of Sciences, Ural Branch, RAS, grants of the Russian Foundation for Humanitarian Sciences and the Russian Foundation for Fundamental Research. He organized 15 international and all-Russia, as well as a number of regional scientific forums, including a series of conferences and symposiums on historical demography. He is Responsible editor of more than 40 scientific publications, organizer of the scientific journal “Historical demography” (2009), thematic series of collections of articles “Ethno-demographic processes in the North of Eurasia” and “Daily life of the Komi region”. He is Chairman of the Presidium of the Komi Science Centre, Ural Branch, RAS, Chairman of the Scientific Council of the National Museum of the Komi Republic, Chairman of the Komi Republican charity public Fund of victims of political repressions “Repentance”, a member of the United Scientific Council for Humanities, Ural Branch, RAS, of the Board of the international society of historians “Fenno-Ugrika”, of the Russian Committee of Finno-Ugric historians, of the Collegium of the Ministry of Culture of the Republic of Komi, of the public Council of Municipality “Syktyvkar”, member of Editorial Board of scientific journals “Journal of the Belarusian State University. History”, “Ural Historical Bulletin”, “Proceedings of the Komi Science Centre, Ural Branch, RAS”, “Finno-Ugric world”, “Heritage”. For achievements in the field of fundamental research and scientific-organizational work he was awarded the State scientific scholarship for outstanding scientists of Russia, was awarded Honorary certificates of the Ministry of Education and Science of the Russian Federation, the Ural Branch of the Russian Academy of Sciences, the Komi Science Centre, Ural Branch, RAS, Honorary diplomas of I.Kuza University (Iasi, Romania) and M.Bela University (Banska Bystrica, Slovakia), the honorary title “Honored worker of science and technology of the Russian Federation”.

He actively cooperates with higher education institutions of the Republic of Komi, the European North of Russia, Belarus, Kazakhstan and Slovakia, makes a great contribution to training: directs graduate students and doctoral students, conducts scientific and practical conferences of young scientists, students and schoolchildren. Under his leadership, 2 Candidate’s Dissertations were defended. He is Foreign co-head of 5 doctoral students (PhD). He was a member of the regional dissertation Council at Syktyvkar State University, headed the State attestation and examination commissions, he regularly acts as an opponent in the defense of Doctoral and Candidate’s dissertations in various dissertation councils. He is co-author of 7 textbooks; his works are widely used in the educational process. He is Laureate of the State prize of the Republic of Komi in the field of education, awarded with Diplomas of the Ministry of Education and Higher School of the Komi Republic, Syktyvkar State University.

He fruitfully conducts popularization work: published 20 popular science books, a large number of materials in the media; was the editor-in-chief of the journal of local lore, one of the organizers and leaders of the Society for the study of the Komi region and the cultural and educational organization “Syktyvkar”. He was winner of the RFBR scientific and popular articles competitions, for educational work was awarded Diplomas of the Russian Union of veterans of Afghanistan, Ministries of Culture and National Policy of the Republic of Komi, Municipality “Syktyvkar”, etc., Diploma of the Political Council of the party “United Russia”, letters of Thanks of the Head of the Republic of Komi, Interregional public movement “Culture brings people together”, etc.